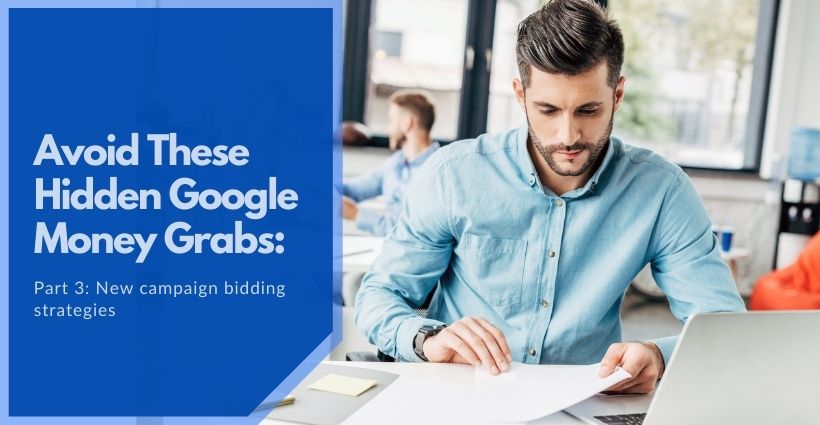 Google makes it easy to create new campaigns, with a wizard-like interface that takes your input and helpfully suggesting features depending on your campaign’s goals.

If you’ve followed along with the first two blog posts in this series on Geotargetting and Targetting Expansion, you know that sometimes Google’s suggestions serve Google’s stockholders before advertisers. In other words, the suggestions serve to maximize Google revenue while costing advertisers more than they might otherwise pay.

For example, as we’ve seen, Google by default shows ads outside the advertiser’s specified geographic location. This incurs a cost for wasted clicks coming from people who are not in the target audience.

Another feature that leaks cost is conversion-based automated bidding. For example, during campaign setup Google usually displays this:

At the beginning of a new campaign, Google has zero data regarding the conversion behavior of your site or target audience. Google will “learn” the conversion data it needs to set bids automatically and accurately, but frequently this learning period can last weeks or more.

During that learning period, the new campaign is very unlikely to perform as desired. Click prices could be too high, click volumes low, or conversion costs too high. In essence, Google is charging the advertiser a “learning tax.”

When setting up a new campaign, specify a bidding strategy that is not based on conversion data – say, Manual CPC or Maximize Clicks (by clicking on the link indicated by the arrow in the illustration).

Wait until at least 15 conversions have accumulated, and then switch to a conversion-based bidding strategy, like Target CPA.

Take control of your new campaign and avoid paying the Google “learning tax!”

3 Major Challenges SaaS Marketers Face and How to Solve Them

Software as a Service, also simply known as SaaS, is a software delivery model that has become more and more popular. This is partly because of the subscription mode of payment that gives customers some control on how and when to use the software.Due to increasing...

END_OF_DOCUMENT_TOKEN_TO_BE_REPLACED

5 Reasons Why B2B Marketers Need SEO Now More Than Ever

Over 61% of B2B decision-makers start the decision-making process with an online search, making SEO as important for B2B marketing as it is for B2C. It is no longer a good-to-have but rather a requirement. Businesses that invested in SEO during the pandemic...

END_OF_DOCUMENT_TOKEN_TO_BE_REPLACED

Google PodcastsAndroidby EmailRSS
×
"A hundred times every day I remind myself that my inner and outer life depend on the labors of other men, living and dead, and that I must exert myself in order to give in the same measure as I have received and am still receiving."
- Albert Einstein